So effective to be able to listen to and record my favorite music using #Minidisc. And it works completely _offline_ too.

Found this crazy nutty Austrian (German) song at the end of this fun MiniDisc. Wow.

Found this song by Ofra Haza on a recently obtained second hand MiniDisc as radio recording and got it stuck on repeat! Powerful stuff.

It's a great process of Zen while entering the labels for the track recordings on a MiniDisc, one letter and capital at a time. 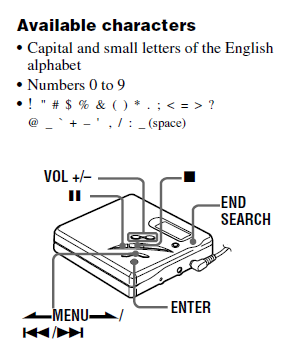 Enjoying recording my music to #MiniDisc and listening to the music on my Sony MZ-R500 from 2001. The original iPod was released in 2003. Who is still listening to music on their first iPod devices today?

I'm enjoying listening to music on my re-discovered #MiniDisc players. Pop in the disc, press play and listen to about 150 minutes of your own music in clear digital quality.

And it all works offline and no need for recurring subscriptions and disappearing tracks, when the streaming site decides to no renew their licenses.

Love this comment by MGA X from 3 years ago:

> DCC wasn't the winner. Minidisc was for sure. Minidisc ended in 2013, 21 years after release. That's a long time for a digital format. DCC ended 4 years after it's release. I use MD now for recording and playing my vinyl records! Perfect for in home, combined with a good stereo! And it's good to have something different then your phone in home, for playing music! It's very relaxing offline music! Life can be so boring, doing everything on my phone!!

Online auctions as a spectator sport

The last auction I followed for a Sony MZ-RH1 #minidisc player was a real nail-biter. Within the duration of the final 60 seconds four bidders competed with each other, with the bid going up from €188 to €289.

The winning bid went to someone who made a bid only 4 times for this item and only followed a single auction in the last period. They won against someone who, looking at their bidding history, is going through some effort finding the rare gem.

ps. I am not going to make this a regular report - just thought this last auction was particular and I was personally glad the winning bid was just a little bit more than what I offered for a similar device just last week.